We're here to help. Send us an email at:

and we'll get back with you as soon as possible.

In the United States of America, The United Methodist Church is divided into five areas known as jurisdictions: Northeastern, Southeastern, North Central, South Central, and Western. Every four years, the jurisdictional conferences meet to elect new bishops and select members of general boards and agencies.

The North Central Jurisdiction (NCJ) is a combination of 10 Conferences that span from the Dakotas/Minnesota to East Ohio. Every four years, elected delegates gather to discuss and vote upon new episcopal leaders and matters of the Jurisdiction as well as to worship and fellowship together.

Jurisdictional conferences are generally held in years divisible by 4, such as 2016, 2020, 2024, etc., with the exception of special sessions, or when events such as the global pandemic require rescheduling. 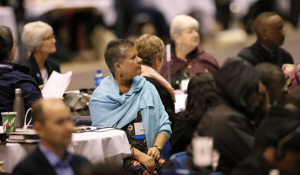